The Second Age of Grant

It starts now. Born Hiram Ulysses Grant in 1822 – the first child in a plain family of the frontier – the future Lieutenant General and President reinvented himself many times during his life. As “U. S.” Grant, he won the Civil War, he protected the peace, and he rose to the pinnacle of power and popularity. With a rare combination of a relentlesssense of purpose, and personal humility, Grant stands alone with Washington among our Soldier-Presidents.

The National U S Grant Trail Association was founded in 2019 in anticipation of the bicentennial of Ulysses Grants birth, April 27, 1822. With a current Board of Directors representing five states, the aims of the National Association are these:

The National U. S. Grant Trail Association is a 501c3 non-profit educational organization and is qualified to accept tax-deductible donations. 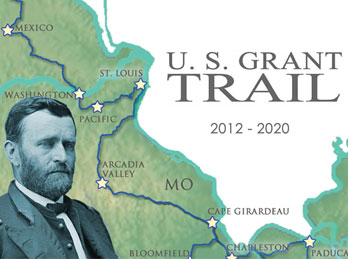 The U. S. Grant Trail has its roots in the era of the Civil War sesquicentennial (2011 to 2015). Established in 2012 as a program of Missouri’s Civil War Heritage Foundation, it’s first foray into public education was a map of Ulysses Grant’s first days and weeks as a combat commander in the Civil War. Since that time, the Foundation has expanded to include three maps, tracking Grant’s movements from…